Facing the Megavalanche on a tandem 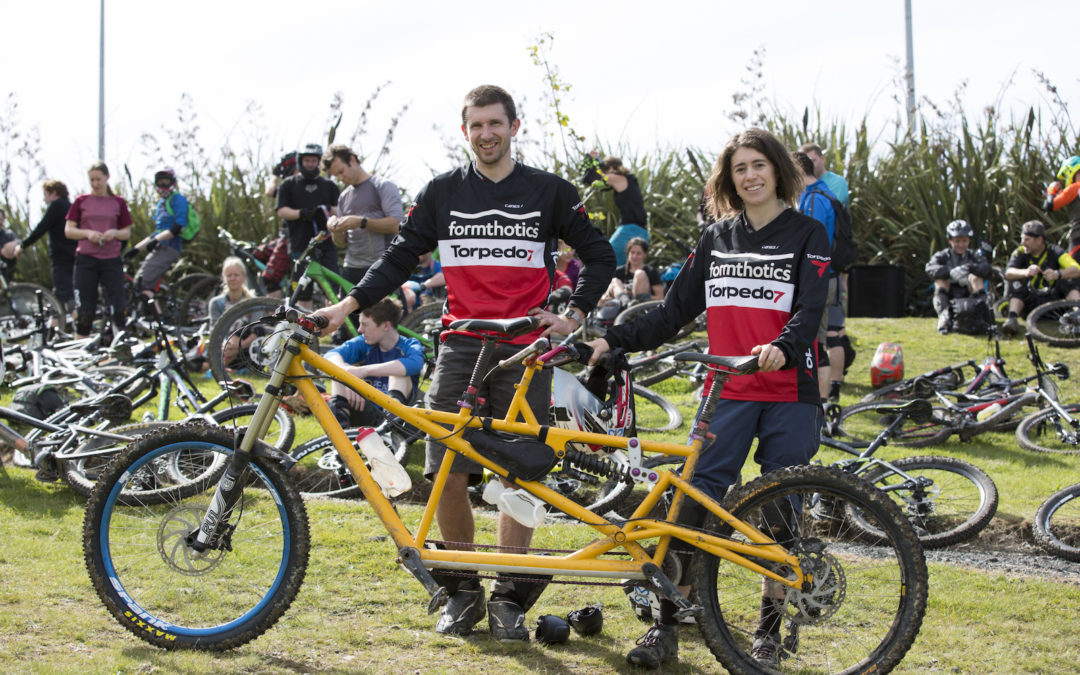 Jackson and Rose Green are a couple from New Zealand and they have asked us if it would be possible to race the Mega in tandem!

We’ve answered them that we could “authorized” it, but they will have to deal with the “possible” part on their own ! 😉

Here are some details about their participation and how they feel about it!

One bike for two at the top of the glacier ! 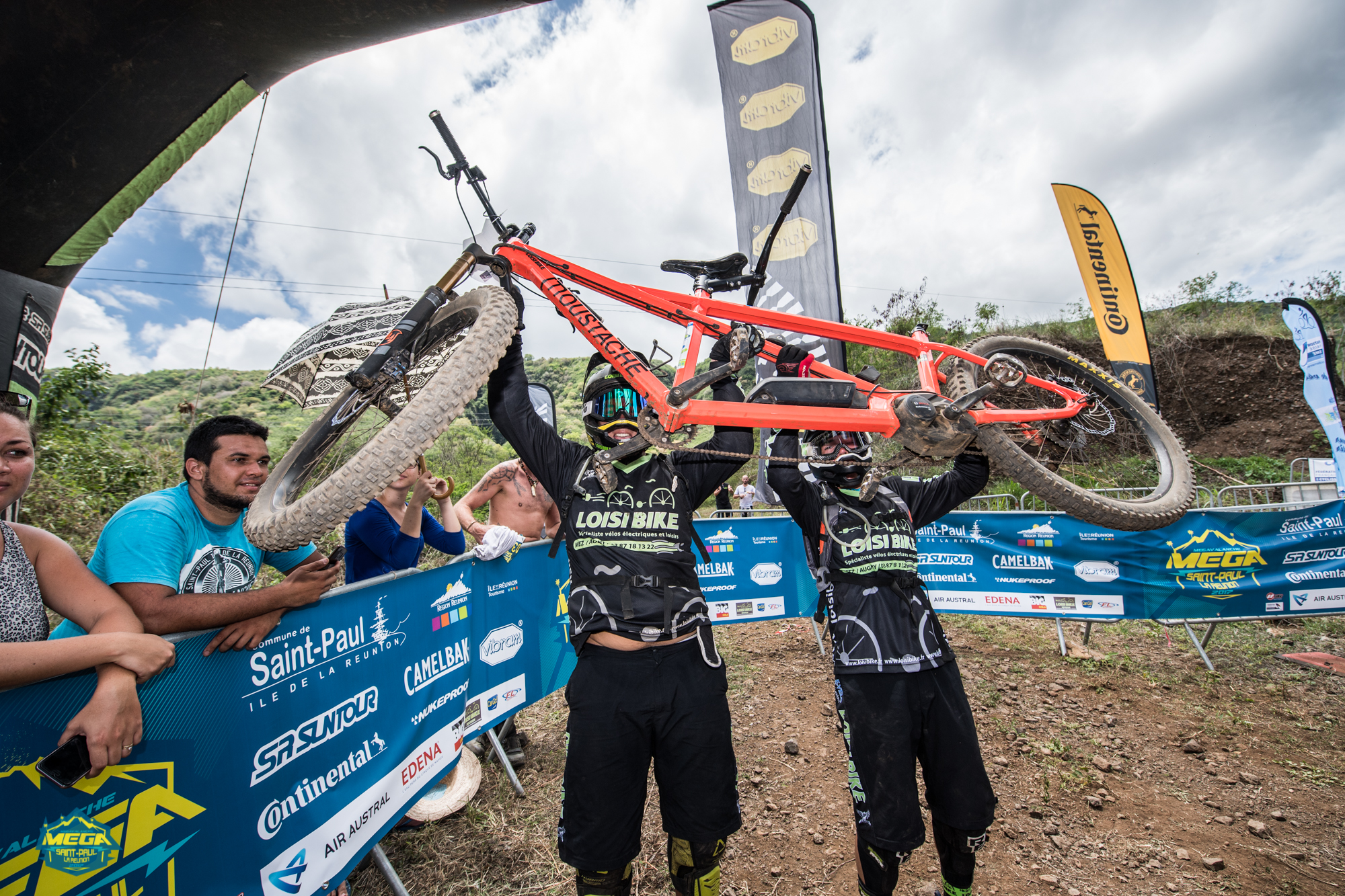 If in 2017 two riders from Loisibike completed the Megavalanche Reunion Island with an electric tandem (crossing the line without back seat post!), nobody has yet race the one in Alpe d’Huez!

Who are you, what is your history? Where do you come from and why do you ride tandem?

We are Jackson and Rose Green, pioneering tandem mountain bikers.  We live in Christchurch, New Zealand.  Why do we ride the tandem?  It all started in 2005 when Rose wanted to be part of a famous road race around Lake Taupo in the centre of New Zealand’s North Island.  But she didn’t really want to pedal all that way so she suggested we ride tandem so Jackson could help tow her around.  We borrowed an old road tandem and had a great time road racing.  We loved the teamwork and being able to ride together without anyone having to slow down or try harder than they wanted.  But we were mountain bikers at heart so we knew we had to give it a try offroad. almost always on the tandem. 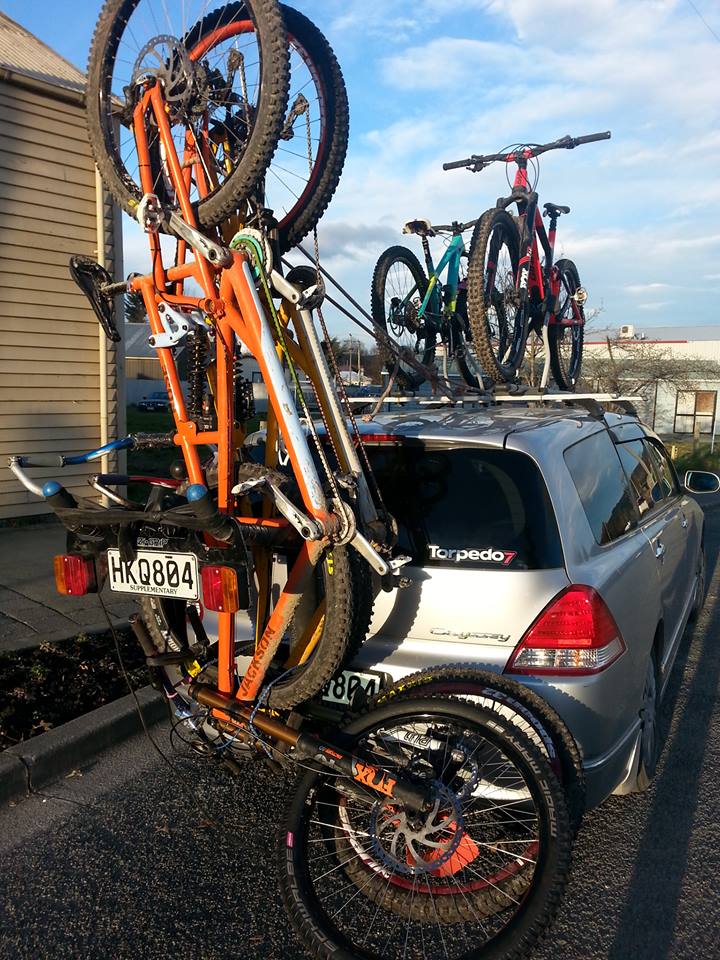 We searched around for a tandem mountain bike for ages, and eventually found an old touring tandem that met our student budget.  We spruced it up with a suspension fork and paid someone to widen the chainstays to accept a fat tire.  Then we rode and raced it in cross country races all around the North Island. 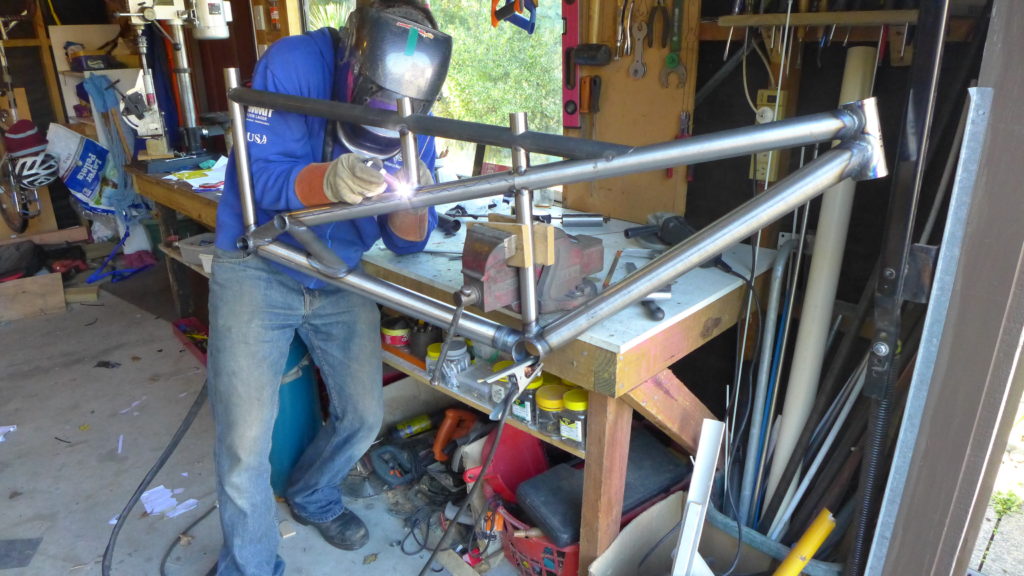 After a few years our tandem riding skills had improve and it became obvious that we needed a more capable bike.  In the 2009 Single Speed World Championships Of New Zealand, one jump in particular would buck Rose so much that her feet would be ripped from the pedals and her bottom would be higher than her head. Very scary! But we couldn’t afford to buy a commercial full suspension tandem frame, so instead Jackson bought a welder, taught himself to weld, and got to work on a new frame.

We still love the teamwork and being able to ride together.  There are many couples who mountain bike together but few who can be as in-tune as we are.  We also really like being able to race without the pressure of having to beat anyone.  When we come near the back then everyone says “oh well, it’s amazing they could even do it on a tandem“.  And when we come closer to the front then people are still impressed.  Its a nice feeling.

We still ride a lot on our one-person bikes too, but when we race it is almost always on the tandem. 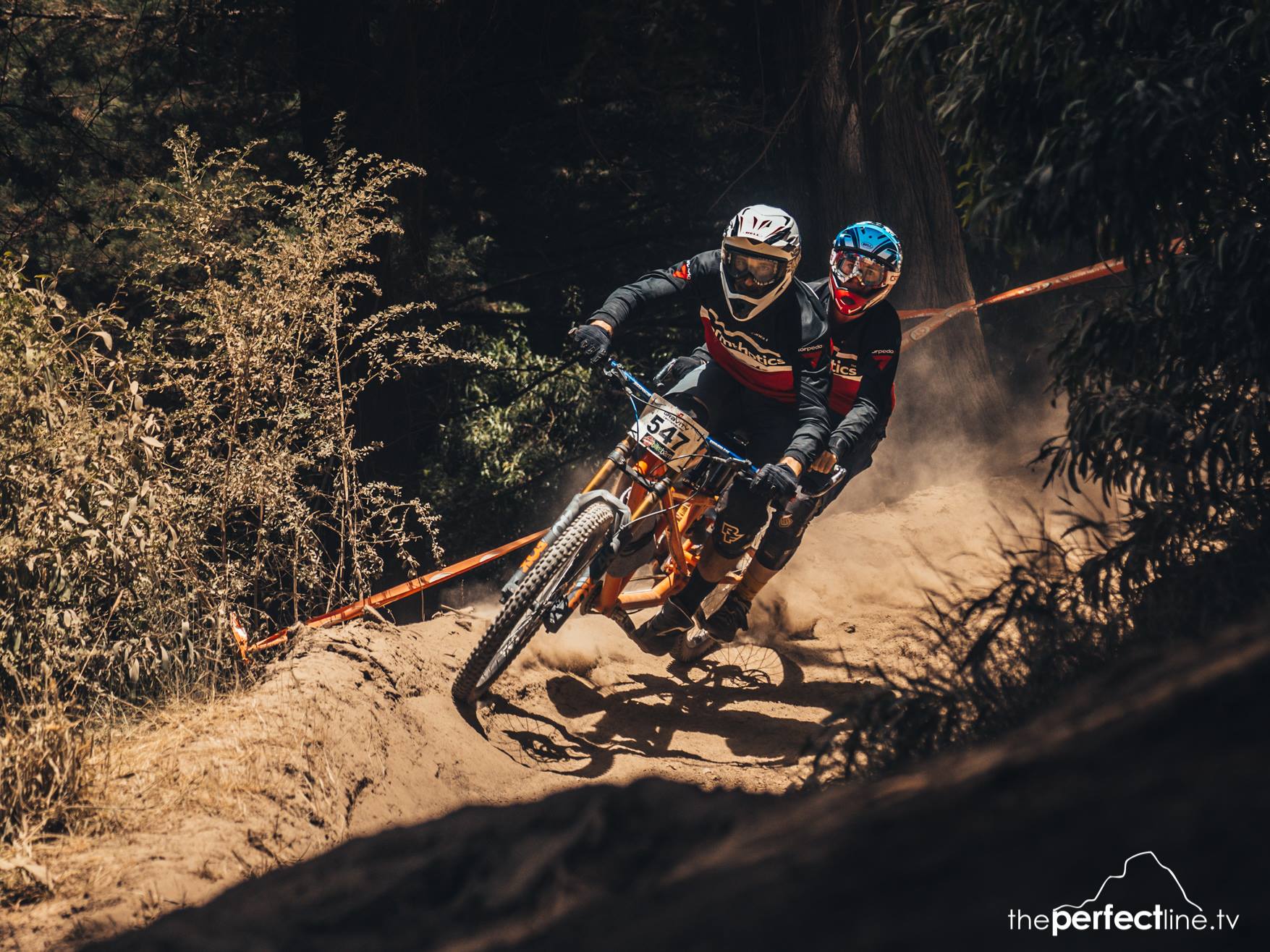 Have you already take part in the Mégavalanche (classic “one-person bike” 😉 )?

We’ve never done “the” Mégavalanche before, but we have done similar “Mega” style races in New Zealand.  The most recent was the Cardrona Mega Avalanche in January 2018.

Why do you want to ride the Mega with a Tandem?

The Mega is such an iconic even for mountain bikers.  I think it is probably the most famous mountain bike event in the world outside of the World Cups.  So obviously we want to race it.  So when we got the chance to be in France while the Mega was happening, it was an easy choice. 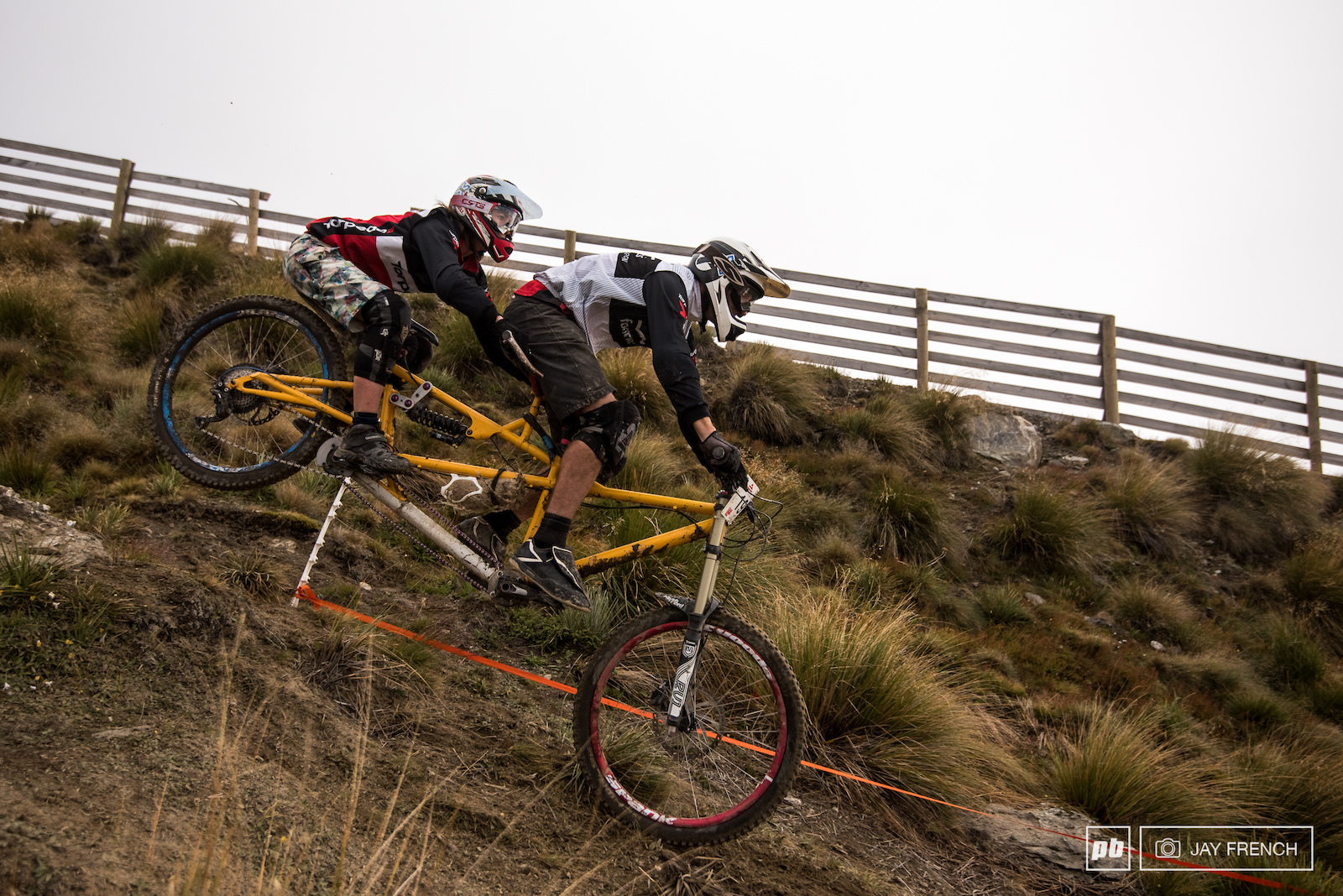 Who is front, who’s back? Why?

Jackson is usually the Captain (at the front) and Rose is the stoker.  We sometimes switch around for riding on the road or easy trails, but for anything challenging it is much easier to have the heavier, taller, and stronger person at the front.  The stoker’s weight affects the way the bike moves a lot.  The stoker can steer a tandem from the back seat the same way you can steer your normal bike with no hands on the handlebars.  But this effect is much worse if the stoker is larger.  A good stoker, like Rose, can shift their weight to help the captain 95% of the time.  But because the stoker can’t see where they’re going, they can never get it 100% right. 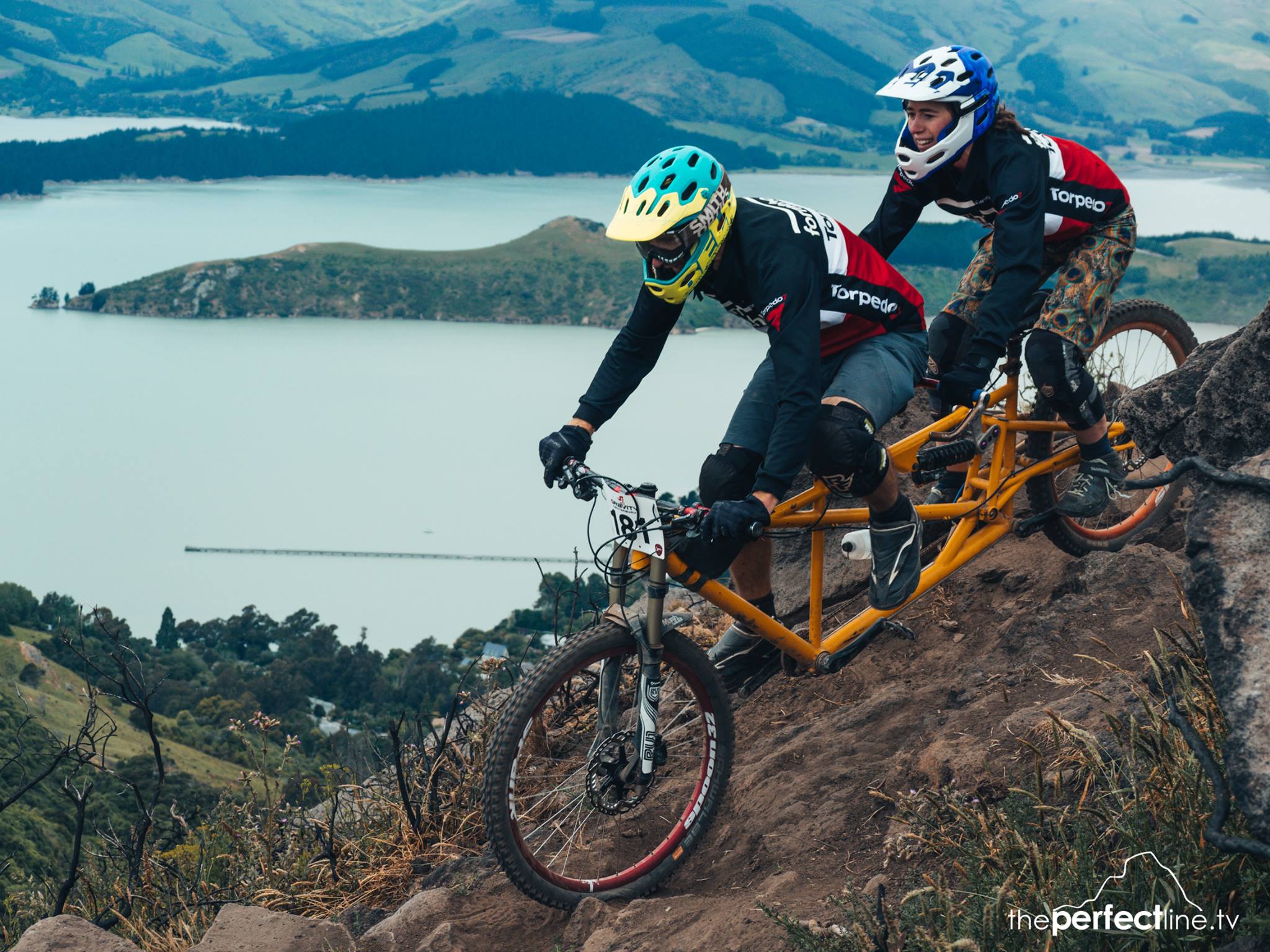 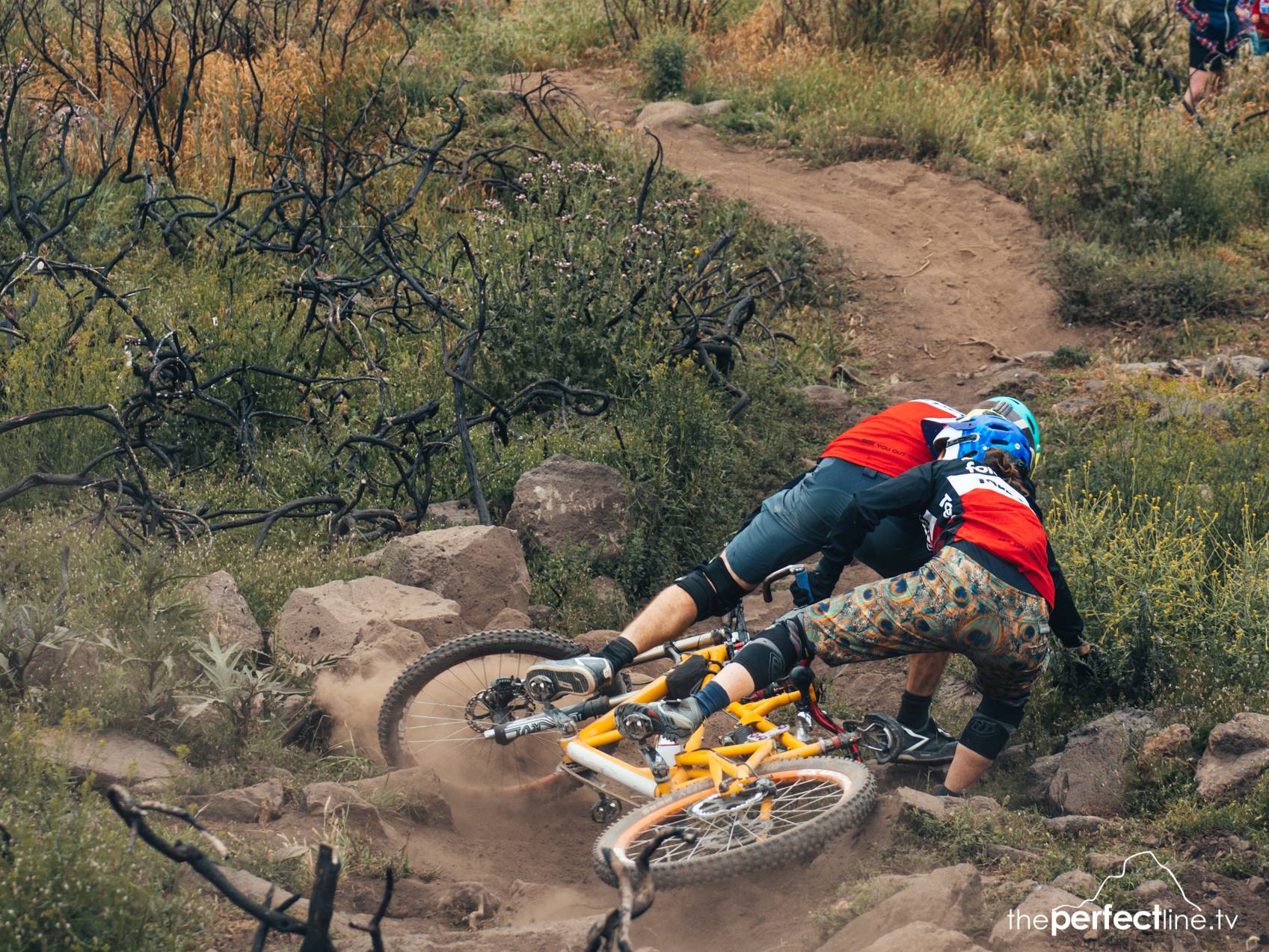 Which are the hardest part in the trails when you ride a tandem?

The big challenge for us is low-speed drops that catch the bottom bracket.  Because the front bottom bracket is closer to the front wheel than the back, it falls much more quickly than the bottom bracket on a normal bike.  That means if we can’t do a drop fast, then we can’t do it at all.  As long as we have speed the bottom bracket will fly over the obstacle, so it is only slow-speed sections that are the problem.  Often we can ride a whole DH track only to come unstuck on a little roller on an XC track that has a tight corner just before it, and isn’t steep enough to get speed again.

Everyone assumes that tight corners will be the hardest bit, but they are actually fine, especially when going downhill.  When we have speed we can skid the back wheel around to make the corner work.  As long as it is steep, we can get around any corner that you can ride on a normal bike with both wheels on the ground.  We lose a lot of speed in tight corners, but it is faster than getting off. 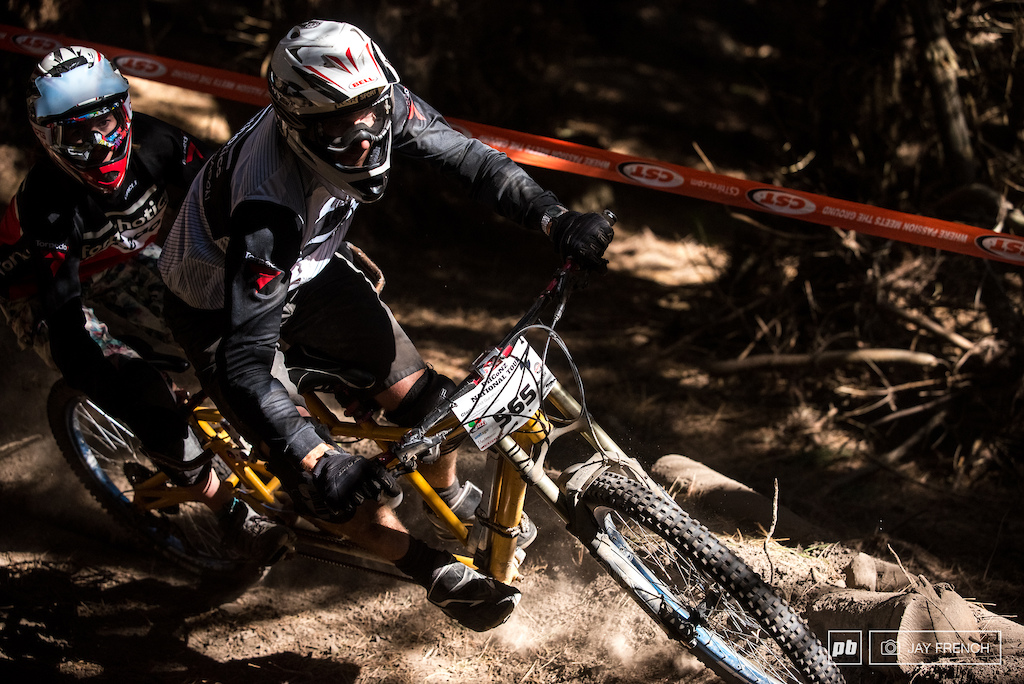 How are you going to deal with the Mass-Start and the Glacier?

Compared to people on normal bikes, we usually lose out a little bit during the first few moments of a mass start race.  We can’t accelerate as fast at the very start, and then because we are so big we can’t fit into small gaps as we jostle with so many others.  But once things settle down a bit after the start then we are riding with others who are not as fast as we are, so we get to make a lot of passing moves.  Its great fun!

We might have some trouble with the glacier though.  We’ve never ridden the tandem on snow-over-ice before.  We seem to go well when conditions are very try and dusty, when it gets slippery on your normal bike.  But when it gets muddy then we start having problems on the tandemearlier than we would on our normal bikes.  But perhaps on the snow we will sink in further and it will work like a rudder?  We will see! 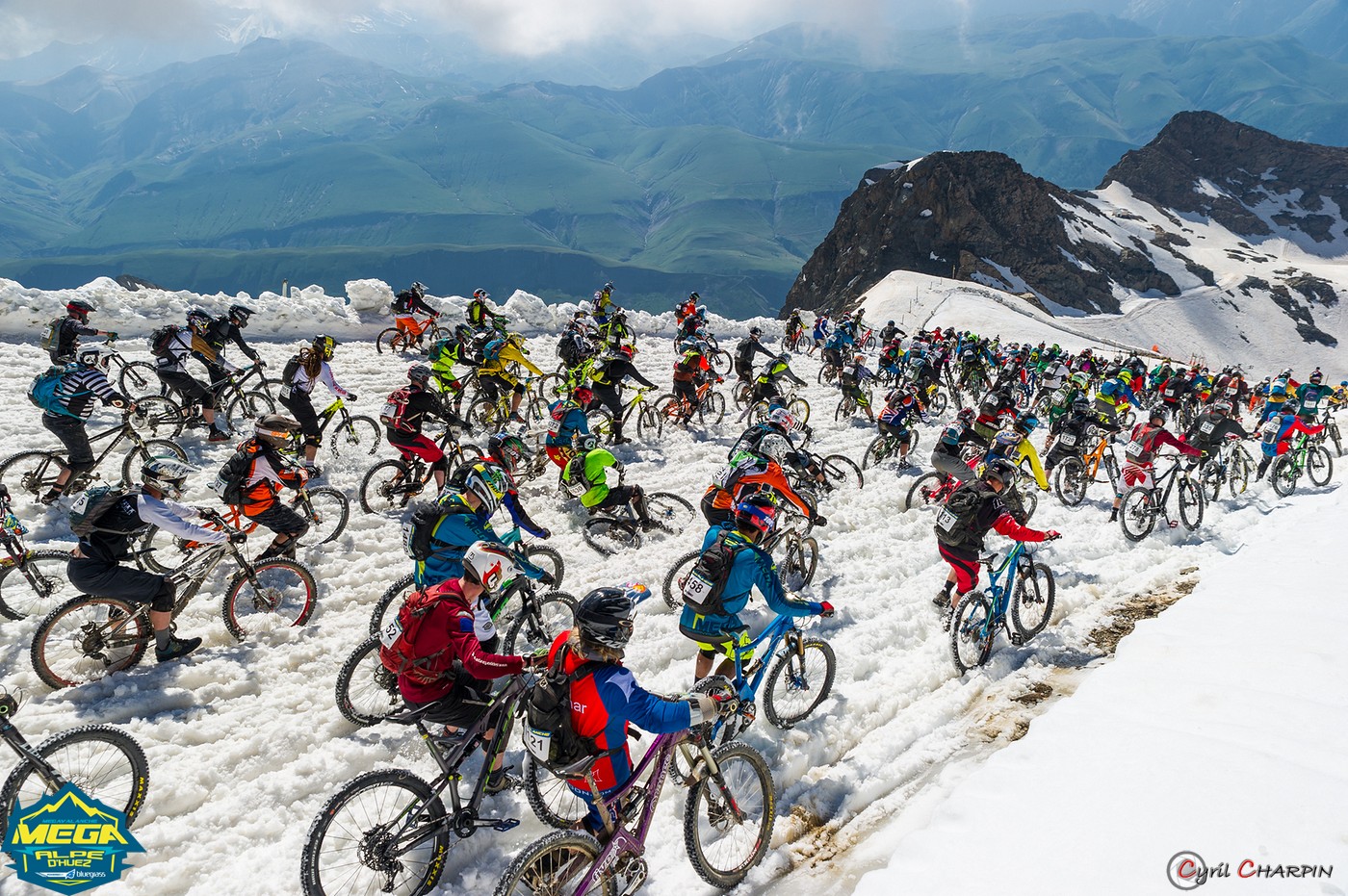 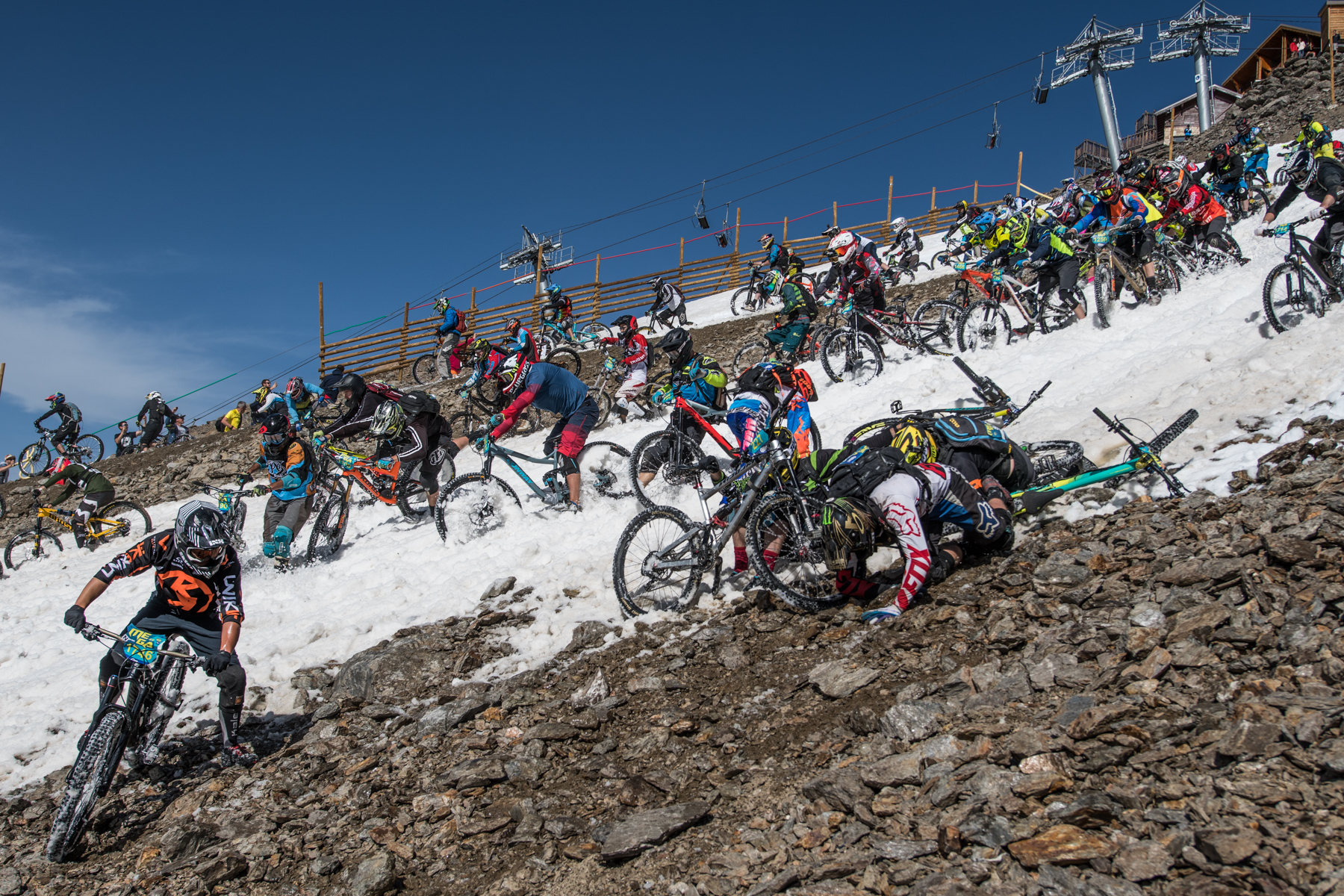 How do you feel about this challenge?

We are both really excited!  We’ve never raced our tandems outside of New Zealand before, so it will be great to take it to the world.  Before we come to the Mega we’re also visiting some people who ride a downhill tandem in Andorra.  It looks like they ride just like we do so it will be fantastic to swap stories and learn skills from each other.

Many thanks to UCC for allowing is to race.  It is wonderful when race organizers have an open mind and can see the fun that a tandem will bring.