1st Race of the E-Bike Serie By Moustache, in Lyon

The opening round of the E-bike race season !

The E-bike serie was the main event of the Electro Bike Festival Lyon, exhibition village and demo dedicated to the E-MTB that took place on the colline de Fourvière on April 16th & 17th.

Nearly 30 of them answered present to the 1st race of the E-bike Serie By Moustache, even with hazardous weather forecast ! Indeed, it was under the Lyon city’s Sunshine, as rare as appreciable, that the pioneers of the E-bike competition take the race start down the famous trail of La Sarra, on the colline de Fourvière, and this time the goal was to climb it up ! Then, the riders were on for a 1h30 of Endurance race on a circuit of 880m for 65m of elevation gain.

“24h du mans”  like starting line for the thirty racers of the E-Bike Serie !

Starting in classic neck-to-neck “Le Mans” style, the first gaps between the racers appeared on the first climb where the tactical management of the battery assistance is key-to-perform ! Then it was a individual challenge to adopt the right race strategy : enable the Turbo mode straight away and make a huge gap from the racers or just conservative and unleashed the power when the other or out-of-energy ?
In this game, it is often like in the fable : ” The grasshopper who spends the warm months singing away while the ant works to store up food for winter…”

The reason is that, after 1h30 of racing, the cumulation is breathtaking : 31 laps for the best, for 28km and nearly 1800m of elevation gain ! Not surprisingly some of them finish the race with no battery power…  Truth is that an E-bike do not throw away the sporty character of this MTB practice, and that it as a legitimate place in the MTB competition scene. 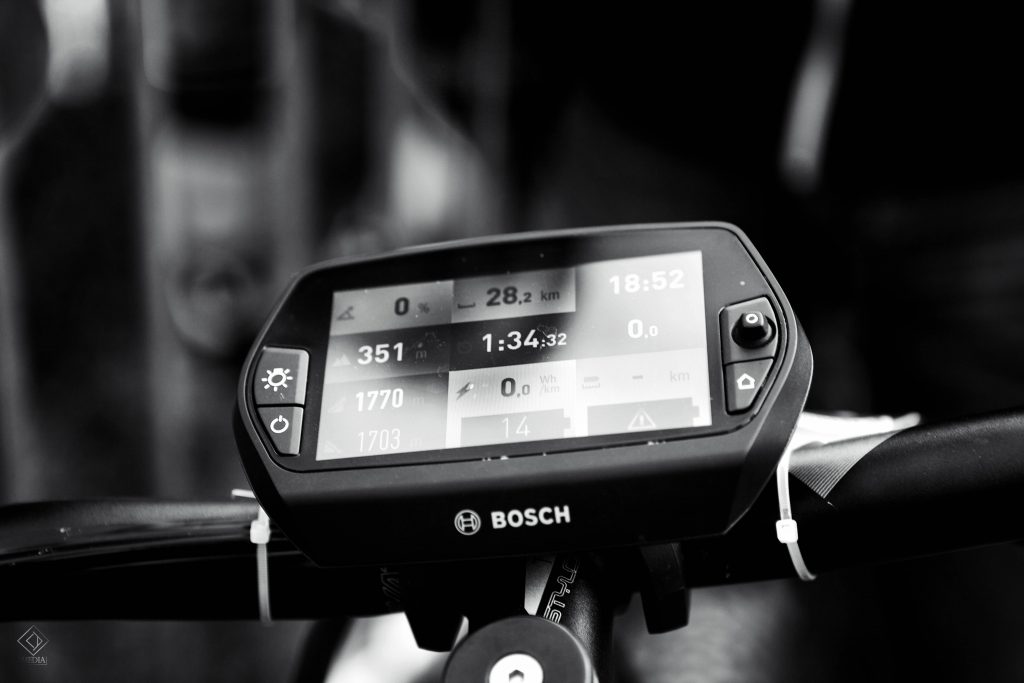 The 28km for 1770m elevation gain of the race course didn’t kills the battery power of the Moustache Bike racer Maxime Rémy !

On the finish line, it is Eric Chautemps, Sur la ligne d’arrivée, c’est Eric Chautemps, store manager of the bike shop Planète Vélo in Lyon, that grab the 1st spot on his KTM, followed by Maxime Rémy and Benjamin Bouquet on their Moustache Bikes. In the Ladies field, it is Caroline Millet (Scott Bikes) that took the race lead during all the competition, closely followed by Chloé Galléan (Lapierre) and Olivia Edwards (Moustache).

Just the once will not hurt, Vincent Julliot was not on the bike, but still close from his teammates from Moustache !